How The Ukraine War Is Affecting Businesses And Economies. 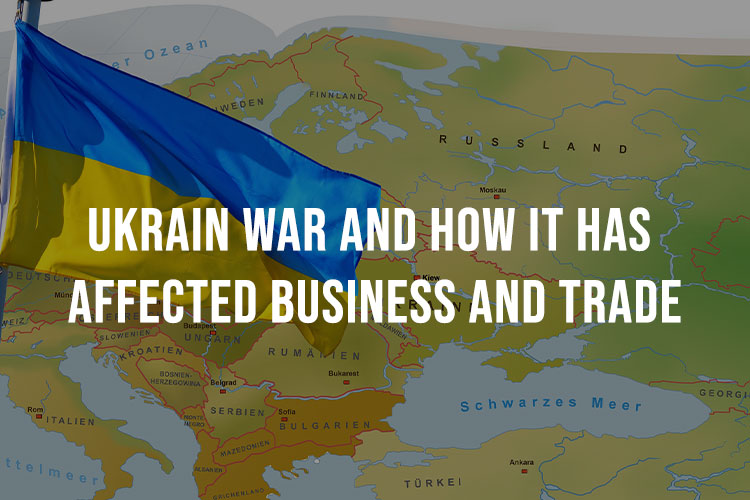 On 24 February 2022, we switched on our phones/TV screens to find that Vladimir Putin’s Russia had marched past the borders of Ukraine with approx 150,000 Russian troops. More than 3.9 million Ukrainians have left their nation, with millions more displaced domestically. The Russian invasion of Ukraine was swift and theatrical, but the economic ramifications will take considerably longer to manifest and will be far less appealing. Every war has the immediate and most obvious effects i.e. suffering, death, starvation, families being ripped apart etc. However, it’s the far-reaching effects on industry, business and the global economy that will linger the longest, and force change.

The confrontation involving Russia and Ukraine will have three major consequences for the world economy: monetary sanctions, commodity price volatility, and supply constraints and disruptions. Through this blog, we aim to analyse the present, as well as look into history to uncover how past wars have affected industries, the relay effect of global sanctions on India, as well as industries that boom and fail during a war.

The unpredictable effect of wars on the business sector

The influence of wars on industrial output vary drastically depending on the type of conflict and time frame within which  said conflict occurred.

The Revolutionary War slowed the growth of the iron and steel industry, and the global gross domestic product (GDP), which could only be approximated very roughly at the time, presumably fell slightly both during and after the war.

The influence of the War of 1812 was perhaps more significant. British barricades of American ports nearly halted American exports, which encouraged the use of import alternatives, particularly textiles.

World War I saw the transition of global economic dominance from Europe, particularly Great Britain, to the U. S., which demonstrated to be a benefit to the American industrial sector. Predictions of GDP growth during WWII ranged from 5% to 18%.

Significantly, the Great Depression, the worst economic catastrophe in American history, was resolved by World War II. As an increasing military expenditure, unemployment and industry slowdowns had largely dissipated, and by 1945, real GDP per capita had roughly doubled from its pre-war level. Since 1945, World War II has paved the way for the West to become the fastest-growing geographical zone. 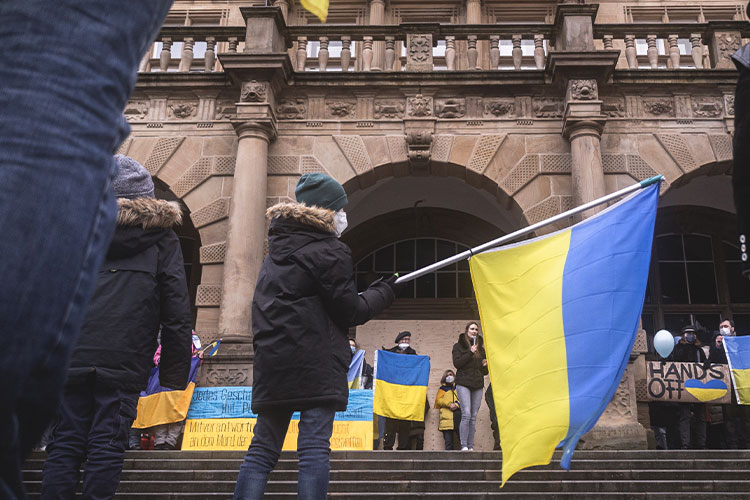 Industries that witnessed a boom in post World War II

With respect to World War II, highly productive growth began before the war and persisted until the early 1970s. Automated technology such as feedback processors, which first debuted in the late 1930s, became a fast-growing field of investment after the war improved manufacturing. Major highway infrastructure, distribution and storage warehouses, and handling equipment, including forklifts and multimodal containers, benefited the retail and wholesale sectors. Oil superseded coal in a variety of applications, including railways and ships. In agriculture, the post-World War II period witnessed the wider implementation of the following:

The relay effect of global sanctions on Russia, in India

The Russian invasion of Ukraine and the subsequent sanctions imposed by several western nations raise the possibility that commodity commerce, particularly oil and gas supplies to Europe, will be affected. This risk manifests itself in a significant increase in the cost of essential commodities, which might result in higher global inflation and weak global economic GDP.

While increased prices of commodities will support Russia, banking sanctions are likely to hurt the country’s economy. The impact of rising interest rates on financial market activities will be negative.

Variations in commodity prices and disruptions in commodity distribution networks are the two main avenues through which the current economic crisis is capable of affecting the global economy. Worldwide oil and natural gas prices climbed dramatically in the week succeeding the commencement of the war, particularly in Europe. Nickel, palladium, neon, wheat, and corn were among the important mineral and food products that saw price increases.

India’s direct trade, however accounts for just 1% oil import from Russia, However, there may be a knock-on effect in the shape of high inflation and slow growth. Up to 85% of India’s crude oil requirements are met by imports. International oil prices have risen to a 14-year high, resulting in broader pricing pressures. After crude oil prices climbed to $130/bbl amid a growing Russia-Ukraine confrontation, the rupee fell to a new low and bond yields jumped, raising fears of greater inflation and a widening current account deficit.

In the midst of the uncertainty, the Rupee has plummeted to its lowest level ever – more than Rs. 77 to the dollar – raising the cost of imports. The effect on India’s non-weapons, non-oil trade with Russia, on the other hand, is negligible.

How conflict and tragedy mingles with the global stock market percentage.

For all the market watchers, you’ll know better than most about how conflict and tragedy mingle with global markets as they typically weaken as wars begin, recover well before wars end, and regard human tragedy with utter indifference.

In any case, this has been a typical historical pattern. And it continues to play out with Russia’s recent action against Ukraine, with some crucial caveats.

Domestic stock markets fell almost 3% amidst the Russian-Ukrainian crisis, joining an international stock sell-off as the crisis between Russia and Ukraine worsens and increasing crude oil prices weigh on investors’ minds. The standard Sensex was 1,668 points lower at 55,563.92 and the NSE Nifty index was 488 points lower at 16,574.80 in intra-day trade at 10.20 a.m., after plummeting by nearly 2,000 points at one point. Concerned about the potential of a lengthy crisis in Ukraine and its influence on the Indian economy, traders reduced their stakes.

Japan’s, Hong Kong’s, South Korea’s, and Australia’s stock markets all fell by up to 3%. 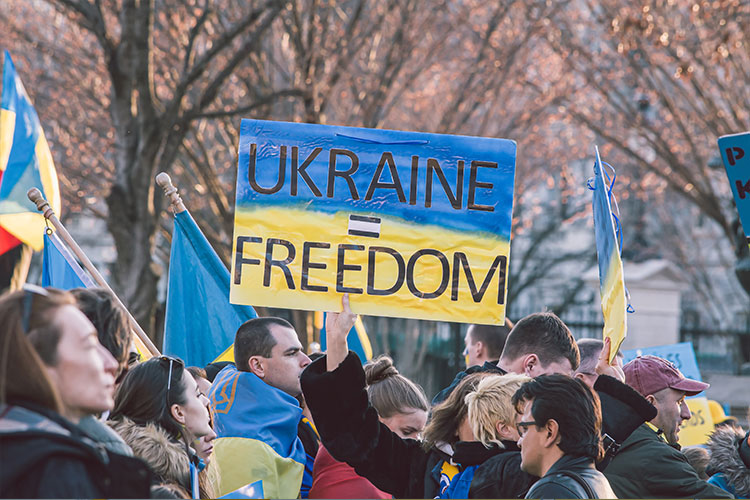 Industries That Fail After A War

As Russia’s war against Ukraine intensifies, various industries are now confronting supply chain challenges and macroeconomic difficulties and are failing.

Rising fuel costs, as oil approaches $120 per barrel, imply that logistics costs will rise as well. Several metal prices used in the automobile sector, such as aluminium and nickel, have suffered high rising costs. Mercedes-Benz has approximately 2 billion euros ($2.2 billion) in holdings in Russia, which might be at risk if Moscow chooses to confiscate the property of international corporations.

Considering that Russia produces almost 40% of the world’s palladium and Ukraine generates 70% of the world’s neon, this is a no-brainer. According to research company Statista, the business, which was valued at over $440 billion in 2020, is expected to expand to around $550 billion this year, on its way to reaching $600 billion the following year.

Russia and Ukraine account for over 30% of world wheat export, 32% of global barley trade, and 17% of global maize commerce. As a result of the cessation of shipments from the two countries, FMCG prices have skyrocketed.

Industries that boom after a war

There has also been a positive impact of the Russian-Ukrainian conflict on some industries. The following industries have witnessed a boom in post-war phases.

Ever since the attack, the S&P Global Clean Energy Index has risen 14.6 percent on a bet that Western nations will work even harder to taper themselves off carbon fuels. Nordex (NDXG.DE) and Vestas Wind (VWS.CO), both wind energy companies, have seen their stock prices soar by around 50%.

Arms businesses led the list of best achievers in the MSCI World index, with gains ranging from 60% to 80%.

Gold, a safe refuge for traders and a buffer for rising inflation, rose 2.89 percent to $1,964.12 an ounce, its highest point since last January.

Russia’s war on Ukraine and subsequent sanctions may not signal the start of a new worldwide recession. The combined gross domestic output of the two nations is less than 2% of the worldwide total. Many economies have also recovered quickly from the pandemic slump and are in good shape. Nonetheless, the dispute has the potential to cause catastrophic economic harm to some organisations and nations, resulting in misery for millions around the world.

If you’re a business owner that’s working hard to make it in these difficult times and need any assistance with growth and scale, click here to direct message us.