Reliance Is Foraying Into Renewables, But Why Now? 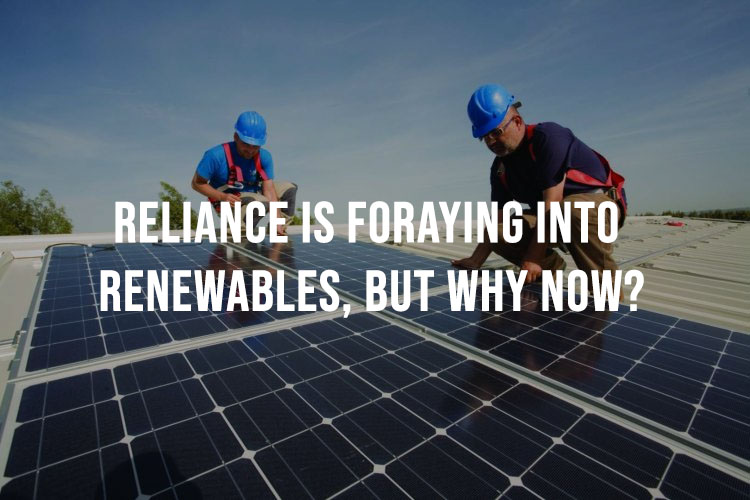 Mukesh Ambani is a visionary who has a great eye for future developments and opportunities. His entrance into telecommunications, as well as the timing, tell much about how he plans all of his projects. As per recent reports,  Mukesh Ambani is planning a multibillion-dollar investment in renewable energy, including hydrogen, wind, solar, fuel cells, and batteries, as part of his plan to turn Reliance Industries Ltd’s energy divisions into one of the world’s top new energy companies by 2035.

According to a business executive, Reliance is anticipated to reveal the broad contours of its renewable energy plan, including investments, when it releases its second-quarter financial results in October.

Chairman Mukesh Ambani revealed a sneak peek at Reliance’s long-term strategy of taking the firm “beyond oil to chemicals” and “re-imagining” the entire energy ecosystem in July.

“The renewable energy industry needs to reinvent itself on a war footing in response to the devastating effects of climate change. Moreover, the world requires clean and economical energy, which must be provided, as it is a prerequisite for ensuring everyone’s quality of life. “The energy business must recognize that fossil fuels and renewables are neither mutually exclusive or contradictory,” he told shareholders at the annual general meeting on July 15.

GOI and a Mission: Power to all

Power remains a fundamental component of infrastructure, essential for a country’s economic growth and welfare. The existence and development of suitable infrastructure are critical for a developing economy like India to achieve long-term growth.

The Indian government’s goal of achieving “Power for All” has hastened capacity expansion in the country. At the same time, both the market and supply sides are becoming more competitive (fuel, logistics, finances, and manpower).

Indeed A Wise Move From Reliance

Solar energy is expected to produce 114 GW by 2022, followed by wind power at 67 GW and biomass and hydropower at 15 GW. By 2022, the renewable energy target has been raised to 227 GW by the Government of India.

India has set ambitious goals for increasing the proportion of renewable energy in its energy mix. By 2022, the Indian government expects to install 175 GW of renewable energy plants, with 450 GW by 2030. To put this in context, India’s total installed energy capacity at the end of 2020 was 379 GW, of which 93 GW (or 25%) was renewable energy.

To date, the government’s primary focus on renewable energy expansion has been large-scale solar on the grid. However, increasing the number of distributed renewable energy (DRE) plants will be required to meet India’s ambitious RE ambitions. Such DRE projects, while their tiny size, offer significant scalability potential if a more favorable legislative and policy framework is formed. They also avoid the extensive lead times and implementation difficulties that come with offtake procurement projects in the public sector.

RTS and OGS have a wide range of market opportunities. Multiple downstream off-grid solar (OGS) applications, such as agricultural pumps, cold storage, and home systems, were previously introduced by the government, and multiple other DRE downstream applications, such as energy storage, EV charging, and rural non-farm productive use appliances, are emerging. There’s a billion-dollar retail potential here.

RIL has begun construction on the Dhirubhai Ambani Green Energy Giga Complex in Jamnagar, which spans 5,000 acres. The project will be one of the world’s largest integrated renewable energy manufacturing complexes. RIL intends to construct four gigawatt-scale plants that will produce and fully integrate crucial components of the ‘new energy’ ecosystem.

An integrated solar PV module plant would be one of them. Raw silica will be converted to polysilicon, which will subsequently be converted to ingots and wafers in the world’s first integrated solar PV gigawatt production. These wafers would be used to create high-efficiency solar cells, which would then be put together into high-efficiency solar modules.

Another setup is intended to construct a plant for sophisticated energy storage batteries. RIL is looking into new and sophisticated electrochemical technologies that could be used to store energy in large-scale grid batteries. Through a combination of generation, storage, and grid connectivity, Reliance hopes to collaborate with global experts in battery technology to achieve the best reliability for round-the-clock power availability.

The ‘Renewable Energy Project Management and Construction Division’ of RIL will offer gigawatt-scale end-to-end renewable plant solutions across the globe. It will empower and collaborate with thousands of green micro, small, and medium-sized business owners who will be able to deploy kilowatt to megawatt-scale solutions in agriculture, industry, homes, and transportation.

With a population approaching 150 million, India cannot rely on fossil fuels. Not only because of limited supplies but also due to the carbon it will emit. Indian grids are already thermal dominant.

In fact, EVs fueled by grid electricity are no better in terms of carbon footprint. That is why Elon Musk is adamant about solar-powered charging stations. Mukesh Ambani has an inherent sense of the future. It’s not only a good indication for Reliance, but also for the country as India Inc. is looking at reducing its imports, particularly crude oil and obviously carbon footprint.

Read More Blog On: Influencer Marketing Strategy For Your Business To Grow Your Reach