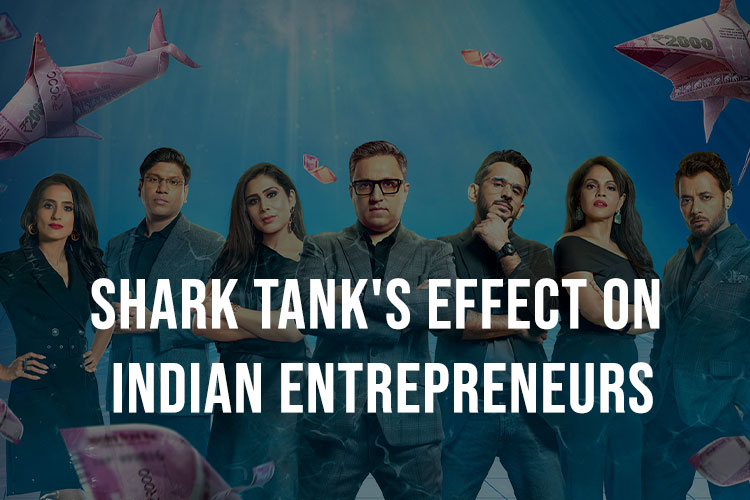 If you ask any Indian middle-class family what type of investment they prefer, the answer would likely fall somewhere between fixed deposits and mutual funds. Terms like equity, bull market, and gross margin are usually not mentioned in a typical Indian living room. However, this has been altered in the last few months. And it’s all because of a single television show.

‘Shark Tank India’ has undoubtedly fostered a start-up surge in India, particularly among the middle class. Individuals who have never previously expressed an interest in discussing business, are now eager to participate and offer their perspectives on business topics during family gatherings or social encounters.

This is the Josh that Shark Tank has instilled in the Indian populace. It is because of this show that many 9 to 5 employees are now seeking their passion and entering the business world. The show has clearly depicted what a business is all about, it taught business terms to laymen in a simple way. Also, the show has promoted the idea and benefits of funding in a business.

Indeed, the show ‘Shark Tank India’ has sparked quite the frenzy amongst the masses, and is supplemented by the booming pace of innovation supported by the correct laws in the country.

As the show has driven significantly positive change in the Indian entrepreneurial landscape, let’s look at how it is shifting the sentiments and psychology of a society that is always aspiring for something better.

The Indian middle class is known for being a risk-averse and conservative investor. Older generations refrain from investing in volatile markets like stocks, bonds, and cryptocurrencies because they won’t “take a chance” on unknown results, preferring to adhere to time-tested fixed deposits and tangible assets like gold.

Every society receives curated wisdom as well as emotional baggage passed down through the years. Consider the people who arrived in India as refugees during the 1947 Indo-Pak partition. Following their adventure, safety and security were paramount to them, therefore, they frequently pushed their children to find a secure career that did not require them to take unnecessary risks.

This was partly because, in their day and age of financial engineering and limited liability, ‘losing it all’ meant something wholly different to them than it does to us. It also corresponds to Maslow’s hierarchy, in that actions are basically similar at different financial or socioeconomic levels. Individuals must first attend to basic needs such as food, water, and rest before attending to self-actualisation, which is a crucial aspect of entrepreneurship.

Shark Tank seems to have played a role in inspiring the conservation in Indian households that is required to bring about a large-scale change in ordinary people’s thinking. We would say that the show has instilled an entrepreneurial sentiment, stimulating minds and motivating go-getters with new ideas. The show connected regular office-going people, and could potentially trigger a wave of entrepreneurship within the population.

From the pan shop owner who never cared about business funding, to the green grocer who never fathomed scaling his business, everyone is now talking about equity, stocks and angel investors. Further, homemakers, clerical staff, and even street vendors seem to have been inspired into considering entrepreneurship as a possible future venture.

Most importantly, the show appears to have garnered enthusiasm about entrepreneurship as a viable career option amongst students of all ages. This change in mindset from aspiring to become doctors, lawyers and engineers, to considering your first entrepreneurial venture is truly significant, and has the potential to change the avatar of the working class in India.

We must say that Shark Tank India has become much bigger than just a show. It catalyses the Indian startup ecosystem by unleashing the potential to spur mass entrepreneurship. Shifting the conservative mindset towards growth triggers intentional learning, which is the first step toward entrepreneurship.

Sharks of the show: the judges and their total investments throughout the show

Curious to know who the show’s sharks are and how much they invested in the show? Well, scroll down to find out.

The first shark is Ashneer Grover, managing director and co-founder of BharatPe: Ashneer. He closed 15 deals throughout the show and invested INR 3.36 crores. “Ye sab doglapan hai”, the famous meme started when Ashneer scolded a candidate and said these words.

If you wear spectacles, Lenskart has to be familiar with them. Peyush Bansal, the co-founder and CEO of Lenskart, made 16 deals with INR 4.19 crores.

“Yeh meri expertise nhi h, so I am out”, a meme that has been going around a lot, are the words of Namita Thapar. The CEO of Emcure Pharmaceuticals made around 15 deals throughout the show, and INR 4.48 crore is the total investment. Also, she has some assets in the USA.

It is just not possible that you wouldn’t have heard of BoAt. Aman Gupta co-founded a renowned phone accessories brand. He is also the marketing director of BoAt and made a total investment of 6.69 crores, and this is, in fact, the highest amount that any shark has invested. He closed a total of 23 deals.

The founder and CEO of People Group, Anupam Mittal, also conceptualised a famous matrimony website in the country – shadi.com. He invested in a total of 16 deals and put in INR 3.71 crores of his money.

Some even say that she is the sweetest judge on the show. Ghazal Alagh is the co-founder and CEO of MamaEarth, a famous skincare brand. With a net worth of 148 crores, she was the youngest shark on the show. She closed just two deals and invested INR 0.4 crores.

Shark Tank India: companies that were on the show

Many were rejected from the 198 contestants that appeared on the show, but some swayed the judges off their feet and made them invest in their ideas. Some of the ideas were so good that they got a ‘yes’ from all the judges.

Do you want to know the top business models that left a mark on the sharks? Well, then, scroll down to find the list of top entrepreneurs that came to show and went home with a fantastic deal!

Savage and Palmer have a team of young and dynamic minds. With a customer-centric approach, we offer various services to entrepreneurs, such as digital marketing, debtor collection, payroll management and accounting and tax management.